Though once a stand-alone town with a modest claim to fame as the world’s leading hay seller, Gilbert, Arizona is today a bustling suburb of nearby Phoenix. As folks from around the country flocked – and continue to flock – to the sunny Arizona capital, Gilbert grew from just under 6,000 residents in 1980 to over 230,000 residents today!

For decades long stretches, it was the fastest growing metropolitan region in the country and looks to remain in the top five for the foreseeable future. To meet the expanding demand for well-appointed exercise facilities, a local entrepreneurial group recently opened its first Crunch Fitness franchise in Gilbert. To give it the right energetic vibe, local A/V integration firm Complete Sound & Video relied on Ashly NE Series multi-channel amplifiers with onboard Ashly Protea™ DSP.

“We’ve been using Ashly amplifiers and processors since we first started doing commercial installations in 2011,” White said. “They’ve been incredibly reliable, and Ashly’s Protea™ processing platform is easy to use and powerful enough to allow any adjustment that I might need to make.”

Although well represented by hundreds of locations in California, the Midwest, and the East Coast, the Gilbert location is Crunch Fitness’s first Arizona location. “The new site occupies a 25,000 square-foot anchor in a busy Gilbert strip mall,” explained John White, partner at Complete Sound & Video. “The architect on the project recommended Complete Sound & Video based on our successful Twin Peaks restaurant installations, and we hammered out a design based on KDM Octasound 360-degree loudspeakers.” Since he had never used that particular style of loudspeaker before, White and the client demoed one with an Octasound subwoofer in the future Crunch Fitness space, both powered by an Ashly multi-channel amplifier. “It sounded phenomenal,” he said, “and could almost handle the entire space, but three would cover things beautifully.”

“Ashly’s technical support is incredible. We’re always connected to a real person who knows the product inside and out.”

Inputs to the system include a local music source, DirecTV, and a wired mic at the front desk for pages that duck the program material via the Ashly DSP. One eight-channel 250W Ashly ne8250.pe network amplifier drives the three bi-amped KDM Octasound SP820A loudspeakers at 250W per channel, and a four-channel 250W Ashly ne4250.pe network amplifier in bridge mode drives two KDM Octasound OS2X12 subwoofers at 500W each. The “pe” option on both amplifiers includes the built-in Ashly Protea matrix digital processor capabilities, which White used to optimize each loudspeaker and subwoofer to the acoustics of its particular location. At the front end, a Crestron control system allows Crunch Fitness staff to select the input source and adjust the overall volume. 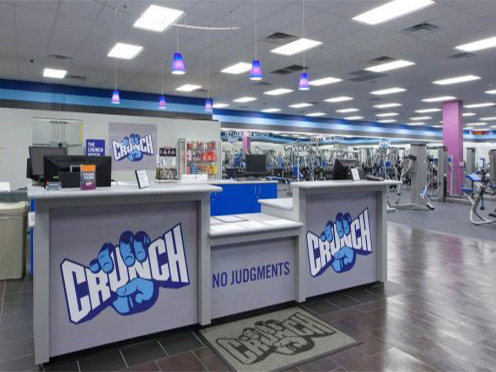 He continued, “The new Crunch Fitness owners really did it right. They knew what they wanted – solid sound that conveyed a sense of power and assurance, and nothing weak or distant. That made it easy to build a great system without haggling it down to something that was just merely acceptable. They’re very happy with how things turned out and have plans to open over a dozen other Crunch Fitness locations throughout Arizona. We’re optimistic that we’ll be invited to repeat our winning formula – with appropriate modifications – for the other locations.”