Listen to the audio for some astonishing facts about how KDM’s Octasound speakers have completely won over the folks at Expo Square. With it’s many large buildings spread over 240 acres, Tulsa Expo Square hosts over 400 events each year. The largest of these buildings – The Tulsa Expo Center – makes an excellent case history.

How is that Possible?

When you but any of the Octasound 360 x 120 speakers you are actually getting 4 speakers in one unit. Rather than using one cone type speaker per unit Octasound gives you 4 horns and one woofer. Some competing speakers use a coaxial cone-type speaker which is basically a smaller cone within the main cone but this doesn’t begin to compete with 4 horns facing in four directions and a dedicated woofer for the lower frequencies.

Take a look at any PA system being used for music in a large space. Almost without exception the mid and high frequencies are being produced by horns. The horn type speaker has a separate driver inside which produces the vibrations. The horn then amplifies and projects the sound. Think of how much louder a trumpet is in a small room compared to almost any other instrument and you’ll see what we’re ‘driving’ at. The trumpet also projects the sound forcefully compared to other ways of delivering sound vibrations. The bottom line is the horn is a far more efficient device giving you much more volume per watt of input signal every time.

Some competing systems shaped like spheres take the sound from a cone speaker and bounce it off a curved surface. Imagine that trumpet player in the room turned away from you. The sound you’re hearing is bouncing off the wall. Now ask the trumpet player to turn and face directly at you. Guess which sound is louder and clearer.S

Spreading The Sound Around

The horn design in inherently more directional in the way it delivers sound — that’s why an Octasound speaker has 4 horns so that the sound is being projected evenly in all 4 directions. (Our 5-series speakers use just 2 horns because they are designed to cover 180° rather than the full 360°)

Proving It In The Real Worlds.

Richard Bailey talks about Octasound. So after all the tech speak is done, how does it work in the real world? While we were visiting Tulsa Expo Square we interviewed Richard Bailey who supervised the sound installations in the buildings that make up this giant facility. 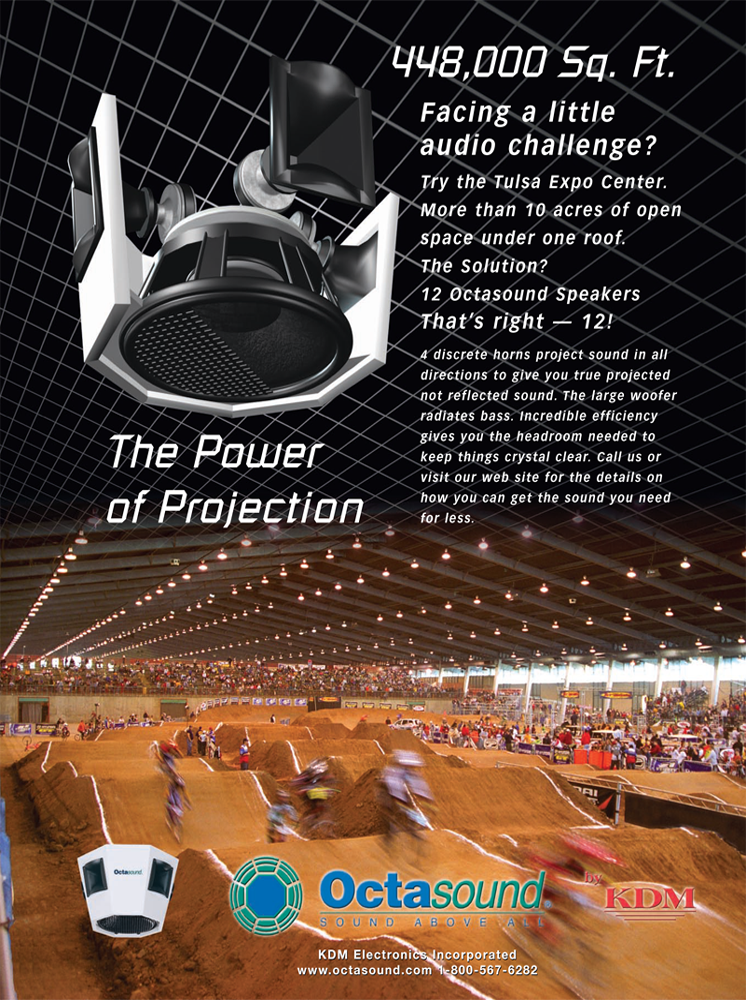